Meet me at the intersection of life, music and object.

In early 1980’s suburban Melbourne, the music of angry white men pulsed through most genres. The biggest summertime hit at Cooinda Primary School was Pink Floyd’s Another Brick in the Wall Part 2. In groups of twos and threes we’d stomp the concrete pavement around the brick walls of our classrooms and whisper roar:

We don’t need no education

we don’t need no thought control

no dark sarcasm in the classroom

All in all it’s just another brick in the wall

all in all you’re just another brick in the wall

We don’t need no education

we don’t need no thought control

no dark sarcasm in the classroom

All in all you’re just another brick in the wall

all in all you’re just another brick in the wall

The cover of Floyd’s double vinyl album is a white brick wall defined by black, and striking slashes of blood red graffiti. A rock opera, The Wall is a concept album. Themes of isolation, abandonment, dependency, and personal protection are explored through the experiences of Pink, a rock star jaded by an audience who seem to be more excited by the event of a concert than the music played.

Through self-imposed isolation Pink confronts the psychological walls he has built since losing his father as a child. He discovers that instead of protecting him from hurt, the walls are preventing him from healing.

A few years after The Wall was released, a lone teenager is heading to a city protest on the Waverley Line train; the carriage lullaby rocks with the screeching and grinding of metal on metal, and from the fast flashing of back fence scenery there is a breathtaking moment of revelation. Black graffiti is scrawled on a white painted brick wall: I Hate People.

With seven silver earrings and a pooka shell necklace knotted to make a choker, the school portrait smile of the light caramel girl with her light brown curls suggest that assimilation is successful.

Her uniform is thigh high and her yellow Spicer jacket is graffitied with texta tags from the kids in her year level. On the back, where a football player’s name and number would go, a football player has written ‘Mon is a Kaffir’. He was the guy who breathed life into words from other worlds like they were pinwheels but this silent message was a pin for pricking. She checked the dictionary wanting to be wrong: Kaffir is the South African word for a skinny black person.

In the year 2000, the K-word is recognised by the South African parliament as hate speech.

What hope did my mum have to embrace her Aboriginality when a court of law accepted that she was ‘found wandering with no means’ as a six month old? What sort of education is offered to a child sentenced to State custody until the morning of her fourteenth birthday when she is sent to be a maid for a doctor’s family?

The only time Mum talked of her past was in the height of psychotic breakdowns where she alternated from sobbing to fractured muttering. It was as though the walls of her childhood were being revealed brick by brick she’d study photographs past and present.

How can we ever understand a life of secrets? Is the need to keep secrets driven by the shame we feel? Surely shame is a just part of a system of domination that creates and cultivates feelings of duty?

Sometimes walls protect us, and sometimes they protect them. Thinking of Mum, I made two brick walls of red and gold glitter. Each brick was blanket stitched with metallic twine, and then the bricks were linked together with metal links and sewn with fine telecommunications wire onto copper netting and perspex board.

Mum’s walls are called Shame and Duty, and when I poured the fiberglass resin and inhaled my shameful environmental vandalism, the essence of self-flagellation shared the air.

On 25 May 2020 African American George Floyd was murdered by Minneapolis police officers while in custody. In this age of social media the unconscionable actions of the officers was captured on video and watched over 1.4 billion times. Within weeks there were over 2000 #Black Lives Matter “I can’t breathe” protests in over 60 countries. Despite Covid-19 restrictions, tens of thousands of people in this country also marched: No Justice, no peace, no racist police.

Here, the sense of rage by First Nations People was exasperated. With 437 Aboriginal mothers, fathers, sisters, brothers, lovers, children, uncles, aunties and friends dying in custody since the 1991 Royal Commission report into Aboriginal Deaths In Custody, the majority of white Australia had remained aloof. Maybe, with all this worldwide attention, justice will reach our shores.

The Wall Remix is a collaboration between First Nations creatives to reinterpret Pink Floyd’s 1979 rock opera The Wall through an indigenous voice. The remix explores the life of Blak, a poet, activist, and child of the Stolen Generations during the 2020 Covid-19 Melbourne lockdown.

While our isolation is not the self-imposed isolation of Floyd’s The Wall lead character Pink, the Covid-19 lockdown has created a space where we can explore and confront our own psychological walls that are preventing our own journey of healing. For many of us this journey involves confronting generational trauma and systemic structures of domination. If we can smash and dismantle these walls of fear and greed surely there will be time and space for us all to heal.

The first track of the album In the Flesh takes place at the Kulin I can’t Breathe: stop black deaths in custody – Justice for George Floyd #BLM protest and explores Blak’s observations of the crowd, the systematic violence of this country, and White Australia’s silence. Where have all of these righteous people been when our people were dying in custody? 437 Aboriginal deaths in custody, in less than 30 years, without one conviction: where was the indignity, where were the massive protests? Are these people here protesting the murder of George Floyd here for the event or the injustice that inspired it?

While Pink Floyd’s Pink is traumatised by newsreel flashbacks of bombings during the war against fascism that left him fatherless, Blak is mortified by recent news footage showing the blasting of the 46,000 year-old shelter of the Puutu Kunti Kurrama and Pinikara people by mining company Rio Tinto. The sacred structure protecting over 7,000 relics was erased from this world so that the company could access 8million tonnes of iron ore worth an estimated $135million. Blak mourns the chasm of cultural genocide and ecocide, and loss of ancestral guidance.

The Quicksand, as the second track of The Wall Remix, posits Blak’s Stolen Generations mum as the profit greedy media Murdocracy. For as powerfully as she rejected the strict and sterile rules of her State upbringing to lavish her children with unconditional love and adoration, she cannot reject the entrenched systems of thought that enslaved her. Here, Blak isn’t ‘gliding on the thin ice of modern life’, they are being sucked into the quicksand of its monochrome culture, the same cultural ideology that ‘stabilised the population’ through The Commonwealth Electoral Act in 1924, but didn’t count Aboriginals until an amendment act in 1983.

For every structure of domination, suppression and oppression in Pink’s life, there’s a brick in his metaphorical wall. In the remix, schools become parliament and the treacherous teachers molding innocent minds are policymaking politicians. Instead of screaming to get kids back from behind the bike sheds, the ‘children’ of the remix are being removed from laboratories at the CSIRO; and when the politicians go home it’s not to tyrannical wives, the politician’s are in bed with corporations and sycophantic landowners.

In Floyd’s The Wall hotel rooms are the setting for emotional, physical and psychological upheaval. In hotel rooms Pink confronts losing his wife, scares a groupie trashing a room, hallucinates that he’s a fascist dictator, is sedated by doctors, imagines himself on trial by a judge who demands he tears down the wall, and finally starts the work to tear down the psychological walls preventing him from connecting to humankind.

In the remix, Blak is arrested at the #BLM protest and is sent to prison. Floyd’s “secret message” translates as the racist legal system filling quotas for privatised prisons. As an Aboriginal in this country, Blak is an easy scapegoat.

Like Pink, Blak is depressed and looks to possessions and musical inspirations from the past but instead of descending into their own insanity, Blak is subjected to the insanity of racist structures and systems. Finally, while Pink puts his own guilty feelings on trial and heeds the call of his inner judge to tear down the wall, Blak’s fate is vastly different.

The Wall Remix is a work in progress currently seeking musical collaborators wanting to make beautiful, angry Blak music  that marches to the heartbeat of ancestral justice. Can we come out of Covid-19 to filter non-indigenous music through an Indigenous lens? Can we use the ‘cross-cultural’ tools of cultural imperialism for our own commercial exploitation? Let’s paint the walls of colonialism and patriarchy with the most deadly musical mural.

Monique Grbec is a child of the Stolen Generations living on Boon Wurrung country. Her lifework is fundamentally text based and addressed through the lens of Indigenous Standpoint Theory. A regular contributor to Koorie Heritage Trust and Witness Performance, her current visual arts work is the video surveillance project ‘Backyard Anthropology’. 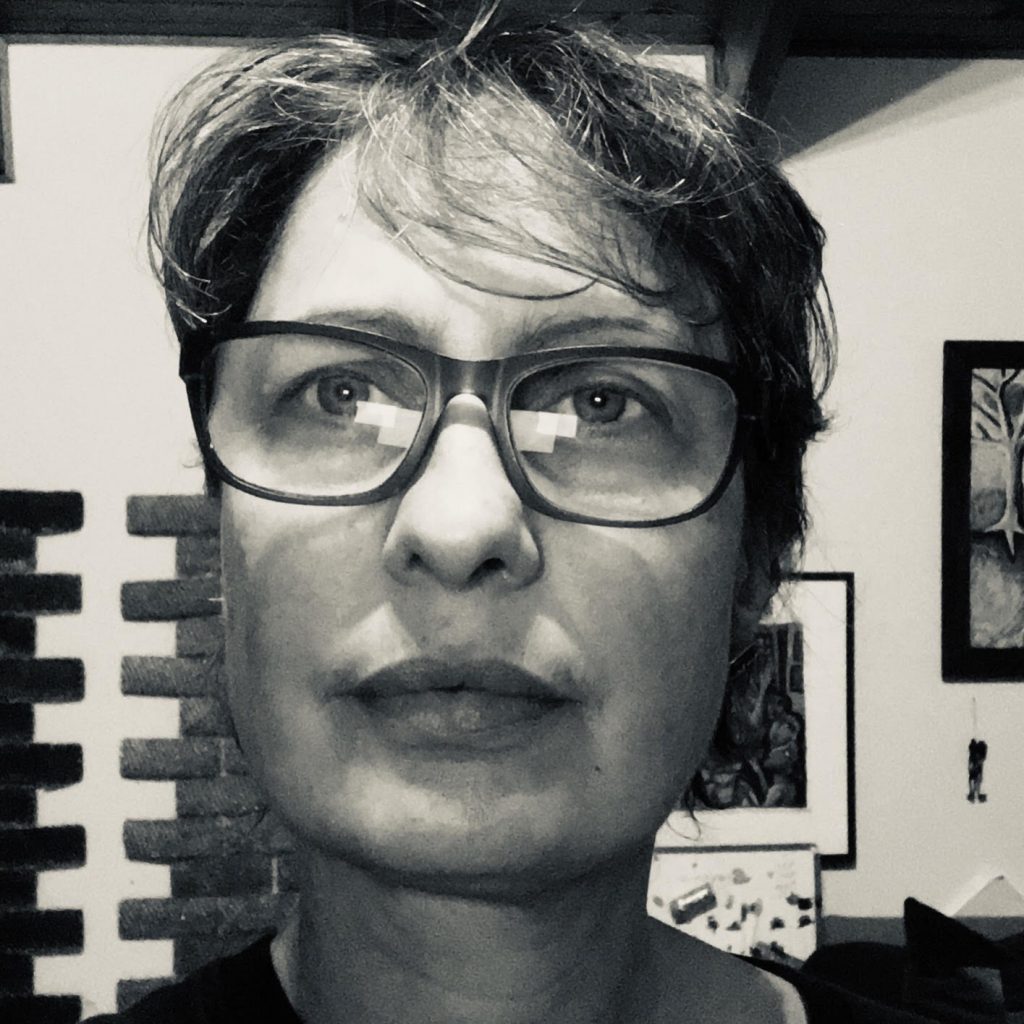