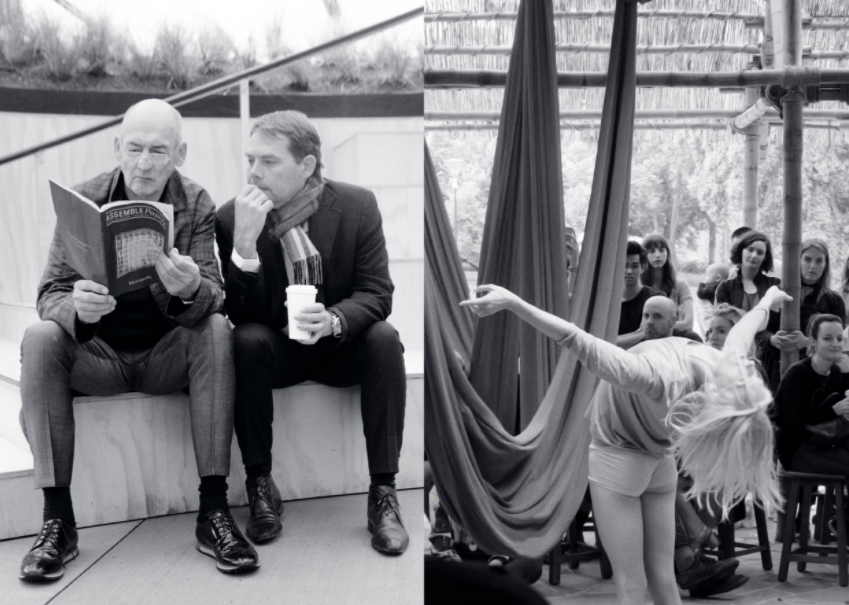 Architects of MPavilion 2017, Rem Koolhaas and David Gianotten sprang into their forward-thinking design for the cultural laboratory by looking back—to the 5th Century BC.

Theatrics, Spectacle and the city

It could be argued that the smaller a design project is, the more challenging it becomes. What a large-scale work demands in architectural mastery through its sheer size and complexity, a small project makes up for with its unyielding need for precision and brevity. So, for example, in a mixed-use complex bringing together office, retail and housing, the (unquestionable) challenges stemming from scale and the involvement of multiple layers of activity might be anticipated; yet it is the small-scale projects that can become a real brain teaser, incorporating a range of needs in a fairly succinct physical presence.

“MPavilion—one of the most high-profile examples of its kind—can certainly provide an architectural riddle.”

Pavilions fall firmly into the latter category, and MPavilion—one of the most high-profile examples of its kind—can certainly provide an architectural riddle. The project’s ambitious brief outlines a compact structure that allows for several readings: an innovative public space for all to use freely; a design-led ‘object’ that promotes great architecture to a wider audience, and an actual and symbolic platform for live cultural debate.

“Even with its thoughtfully laid-out program of events (a marked difference from other pavilions around the world), MPavilion must also cater for the unforeseen.“

Usually relatively small, and often temporary, pavilions are almost always public and open-ended in terms of their use. There are park follies (are they a bandstand? Are they a resting spot?), fun outdoor seating structures and sun-shading canopies—but more often than not, pavilions are a place where needs and uses converge and life alfresco unfolds, often in unexpected ways. “It’s an open situation, we never know how the public will use it, and it’s free and here for everyone,” Serpentine Galleries artistic director Hans-Ulrich Obrist said recently of the Serpentine Gallery Pavilion at the opening of the 2019 structure, designed by Junya Ishigami. Even with its thoughtfully laid-out program of events (a marked difference from other pavilions around the world), MPavilion must also cater for the unforeseen.

On one hand, a lack of a strict formal and functional definition can be a blessing when it comes to design, offering the architect ample creative freedom for experimentation. Not only can usual rules and restrictions be loosely adapted in this type of commission—often seen as a cross between a building and an art piece—but the design must make a point of being fluid from its inception in order to accommodate a host of activities, scheduled and spontaneous. The MPavilion series’ structures have been conceptually and visually powerful as well as physically complex, an architectural synthesis befitting a space conceived to become a multi-layered stage for Melbourne’s urban life and ongoing architectural discussion.

At the same time, a pavilion’s open-endedness invariably comes hand in hand with openness, in the literal sense. Pavilions are outdoors creatures—as well as social ones. So when the architects at the Rotterdam-based Office for Metropolitan Architecture (OMA) were called upon to design the 2017 MPavilion in Melbourne, they turned their attention towards past examples of open-air structures. In particular, they looked at pavilions that played a key role in their respective communities around the world,  especially those found in the largely outdoors-orientated cultures of the Mediterranean. Ancient Greece and Rome offer a wealth of examples and OMA state the historic open-air theatre of Syracuse, Italy (a UNESCO World Heritage site, built by the Greeks in the fifth century BC) as a key source of inspiration.

“We try to offer something new while doing what every pavilion has to do—that is to be an inviting and pleasant space that inspires curiosity.”

Drawing on the influence of the Syracuse theatre felt natural to Rem Koolhaas, who led the project together with David Gianotten, as this typology has since become visible in almost every society and culture, he explains. “An orientation of what has been done before in a particular domain is always key for us. For example, here we looked at ancient theatres as well as the tradition of the Serpentine Pavilions, where we actually participated [in 2006]. We try to offer something new while doing what every pavilion has to do—that is to be an inviting and pleasant space that inspires curiosity.”

The MPavilion commission stipulates to architects that the pavilion must protect a certain number of visitors from the elements while structurally utilising an existing grid-based foundation in the ground -With a brief that prescribed so little, OMA’s design team turned its attention to the specific structure’s role and context to further hone its design approach. Far from being only an architectural gesture, the MPavilion initiative was intended from its conception to provide a platform for debate and enable activities. Addressing the structure as a key piece in Melbourne’s urban fabric, the commissioned architects explore the overall form not as a self-containing piece, but as a part of the city’s current dynamic.

OMA is well versed in the challenges and opportunities surrounding the Australian urban paradigm. In 2012 the firm worked on a site-specific master plan study for Sydney and currently has a number of ongoing projects in the country, such as the Western Australian Museum, which is scheduled to open in 2020 in Perth. “So we tried to also have a dialogue about Melbourne and its issues and problems. How do you deal with them? And how can you have some of that debate inside the pavilion?” Gianotten contemplates. “The dialogue was much more than just the pavilion; it was also about the program. It was also about Melbourne and the tension that was in the air about certain topics.”

“MPavilion 2017 is a public venue with an intimate scale,” a design statement on the OMA website reads, and therein lies the MPavilion architect’s challenge: how to translate that public and social dimension into an appropriate and meaningful physical form. “Everybody praises Melbourne as this most liveable city, but it has significant issues,” says Gianotten. “Not only climate issues, but also car dependency is higher than even in American cities. Is it prepared for the future? Melbourne just becomes bigger and bigger, but doesn’t really reinvent itself. Policy changes and accommodating increased migration are key issues when talking about the relevance of the urban model of Melbourne and the way it needs to transform.”

Combining those different strands of thought, OMA’s response was conceived as a cross between an ancient agora and a theatre—the former traditionally the heart of the athletic, artistic, spiritual and political life in the ancient world’s urban hubs, with the latter offering a cross of entertainment, commentary and information on current and historical events. “It was meant like a forum that could perform like a theatre,” says Koolhaas. “That’s also why it actually only has two elements: the seating arrangement, which is obviously the forum, and the theatre on top, which has all the technical appliances.”

The performative elements of OMA’s MPavilion were consistent with the practice’s philosophy. OMA has a tradition of infusing its work with the orchestration of performance, going far beyond the demands of a brief and into rigorous explorations of forms and uses that break the boundaries of what is expected—or even perceived as ‘normal’. “We always try to design a space in a way that encourages different or unexpected uses rather than prescribing everything,” Koolhaas explains. “This way the building can stay relevant within the context, not only in the moment it’s finished, but also beyond.”

“[How] can you do more than the client expects with the same ingredients?”

“I think that we are using the word ‘performance’ very often in opposition to ‘form’,” adds Gianotten. “Architecture is obsessed with form and because we are reluctant to share that obsession we emphasise the word performance. And what it actually focuses on, this concern, is the question of: [How] can you do more than the client expects with the same ingredients?”

The Naomi Milgrom Foundation’s founder, Naomi Milgrom AO, has openly spoken about the personal impact OMA’s work had on her prior to commissioning the firm to design MPavilion. “In the early 2000s I came across [Koolhaas’s] work when I travelled to New York in search of inspiration for contemporary retailing. The store that particularly stood out was OMA’s Prada store in SoHo. It was an extraordinary shift in store design and it was much more than just a clothing store; it was a real stage for fashion and design.”

More recent OMA work includes the Taipei Performance Art Centre and Manchester’s iconic Factory, each designed to not only serve as wrappers for performance-related events inside, but also perform in multiple ways themselves. The Taipei project contains three stages and reinvents the idea of an auditorium, as well as addressing the theatre as a public space, while the Factory—an expansive warehouse redesign—strives to be an ultra-flexible venue for the widest range of arts to encourage cross-pollination and new relationships. In comparison, OMA’s MPavilion appeared minuscule, yet their approach did not differ: the MPavilion’s significance to OMA’s practice was by no means lessened by size. Koolhaas and Gianotten worked closely with Milgrom to better define the MPavilion’s form according to its public program, and while the architects didn’t go as far as programming activities themselves, they did participate in events inspired by their research, and they endeavoured to make the space interactive “for people to not only consume it but actually participate in it,” says Gianotten.

“The wide range of potential activities to be accommodated meant that a degree of adaptability in the design was crucial, Koolhaas says.”

The wide range of potential activities to be accommodated meant that a degree of adaptability in the design was crucial, Koolhaas says. The idea of movement was invoked—“and this is typically not done in pavilions,” he points out. MPavilion 2017 featured a series of curved steps, a section of which remained fixed in place, embedded into the land and garden around it. A separate, movable, rotating section allowed for a performance area that could be configured according to the requirements of the event taking place inside. This part can shift positions and roles between audience and stage, performer and guest, blurring boundaries and opening up possibilities for collaboration.

The architects wanted the base, this seating space, to feel closer to nature, so they used wood, as it is a natural material while the structure sat in a garden landscaped with twelve species of native plants, enhancing the MPavilion’s relationship to place. The roof was a technical grid device, so the material of choice was more industrial: metal. Featuring a pronounced 180cm-deep aluminium-sheet fascia , the substantial horizontal roof gave the pavilion a strong presence.

OMA’s approach to highlighting MPavilion’s standing as a cultural laboratory yielded results. The pavilion was shortlisted for a number of international awards, including the New York-based Architizer A+ Awards and Amsterdam’s World Architecture Festival Awards, and picked up silver at the Melbourne Design Awards. High-profile guests were part of an imaginatively varied season of events, ranging from discussions about architecture, design and new technologies to musical experimentations, meditation workshops and community picnics. 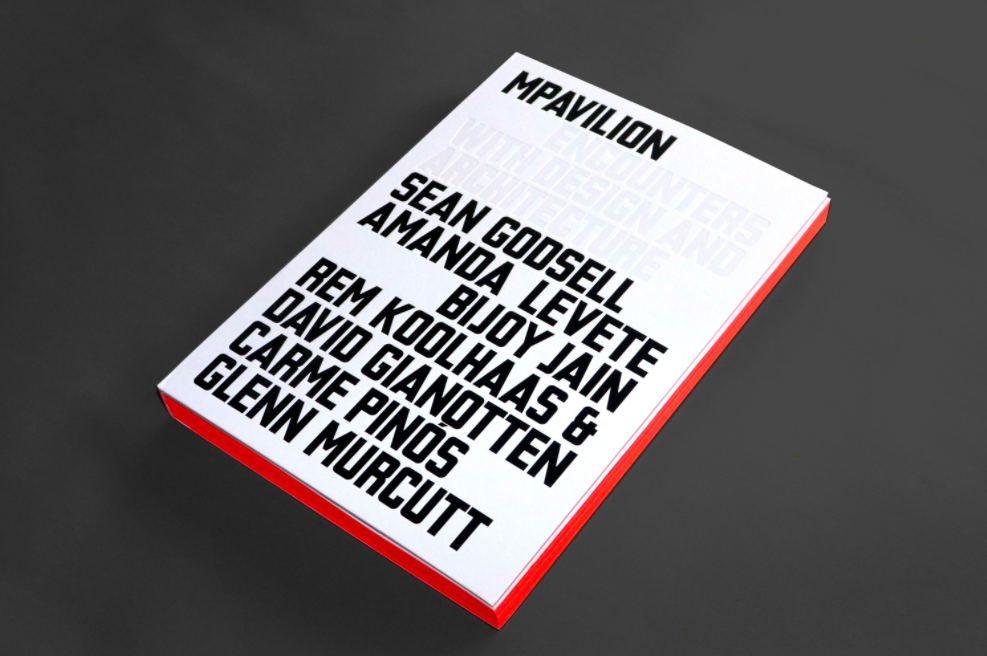