This event is now complete. If you want to revisit the talk, visit our Library, or subscribe to the MPavilion podcast via iTunes, Pocketcasts, Stitcher, Spotify, or wherever else you get your podcasts.

MPavilion’s collaboration with VDF coincides with the release of the book MPavilion: Encounters with Architecture and Design, collecting all of the contributions to the architectural commission to date.

The videos feature a series of conversations between architects including Rem Koolhaas and David Gianotten of Rotterdam firm OMA, Amanda Levete of London practice AL_A, Bijoy Jain of Studio Mumbai, Carme Pinós of Barcelona-based Estudio Carme Pinós, and Australian architects Glenn Murcutt and Sean Godsell. These conversations follow a discussion between Naomi Milgrom, founder of the MPavilion initiative, and Julia Peyton-Jones, former director of the Serpentine Gallery in London and instigator of the Serpentine Pavilion programme.

The following videos originally appeared as part of Visual Design Festival, on the Dezeen website.

In a short introductory video, Todd provides an overview of the conversations that will be broadcast over the course of the day, and details each of the six MPavilions that have been created between 2014 and 2019.

In the first talk of the day, Milgrom and Peyton-Jones discuss the MPavilion and Serpentine Pavilion commissions and interrogate the purpose and potential of temporary architectural structures.

When devising MPavilion, Milgrom drew inspiration from the prestigious Serpentine Pavilion commission, which Peyton-Jones inaugurated during her 25-year directorship at the Serpentine Gallery. The project gave architects including Zaha Hadid, Peter Zumthor, SANAA and Frank Gehry their first opportunity to build in the UK.

In the second talk of the day Godsell, who designed the first MPavilion in 2014 speaks to Levete, who designed its second instalment. The architects discuss how open dialogue between architects, legislators and developers is necessary in order to enable changes in the way cities are designed.

Godsell’s inaugural response to the commission was a rectilinear pavilion with automated walls that fold up to open the interior out to the surrounding gardens.

In the third talk of the day, Levete speaks to Indian architect and Bijoy Jain, founder of Studio Mumbai, about the viability of high-rise dwellings in a post-coronavirus world, the importance of bringing nature into buildings, and the need to prioritise generosity and wellbeing over efficiency in urban design.

Jain’s 2016 contribution to the MPavilion commission was a square structure supported by an intricate bamboo framework pinned together with wooden pegs.

BIJOY JAIN IN CONVERSATION WITH REM KOOLHAAS AND DAVID GIANOTTEN

In a recorded video chat between Mumbai and Rotterdam, the architects discuss the potential for mass migration from cities to the countryside as a potential outcome of the coronavirus pandemic, as well as the need for architects to affect societal changes.

OMA designed an amphitheatre in response to the MPavilion commission in 2017, which featured a rotatable grandstand topped with a monolithic “floating” rooftop.

In the preceding year, Jain created a square structure with an awning-like roof made of an intricate bamboo framework. The structure was moved to a permanent site at Melbourne Zoo following its installation in Queen Victoria Gardens.

Gianotten speaks to Spanish architect Carme Pinós about the threat posed to public spaces by the coronavirus in the next instalment of the interview series.

Pinós, who is the founder of Barcelona-based office Estudio Carme Pinós, followed OMA’s MPavilion in 2018 with an origami-inspired structure formed of latticed timber triangles raised up over three landscape mounds.

She and Gianotten spoke of the importance of protecting and promulgating public space. “I think we need to see public space more in the relaxed environment and not only to ‘consume’ like a shopping mall or busy train station,” Pinós said.

“Sometimes I think the MPavilion demonstrates the meetings, casuals and this kind of normality and is an example I like a lot.”

The penultimate video in MPavilion’s collaboration with VDF features Pinós in conversation with Milgrom, who commissioned the architect’s contribution to the series.

The pair discuss their shared appreciation of Basque fashion designer Cristóbal Balenciaga and how his work influenced the winged design of Pinós’ MPavilion. The conversation also probes Pinós’ belief that the interactions that take place within a building are as important as the structure itself.

Melbourne architect Godsell, designer of the inaugural MPavilion, speaks to Sydney-based Murcutt, creator of the initiative’s most recent iteration, in the final broadcast of the day.

In the video, the pair discuss the huge bushfires and devastating floods that marked the recent Australian summer and reflect on the importance of creating sustainable buildings which coalesce with their environment.

In 2014, Godsell was commissioned to create a rectilinear MPavilion with automated walls that fold up to open the interior out to the surrounding gardens.

Last year, Pritzker Prize-winning architect Murcutt created the sixth instalment of the series, a minimal structure topped with a translucent roof that glows at night.

Running until Friday 10 July, VDF is a groundbreaking showcase of elite design from around the world. Being invited to take the reins for a time is a huge honour, and one that we are going to make the most of in full MPavilion style—with a panel of incredible guests, and a book launch!

Join us on the day for the extraordinary chance to hear global heavyweights Sean Godsell, Amanda Levete, Bijoy Jain, Rem Koolhaas, David Gianotten, Carme Pinós and Glenn Murcutt AO in a series of in-depth conversations for this remarkable, one-off event. 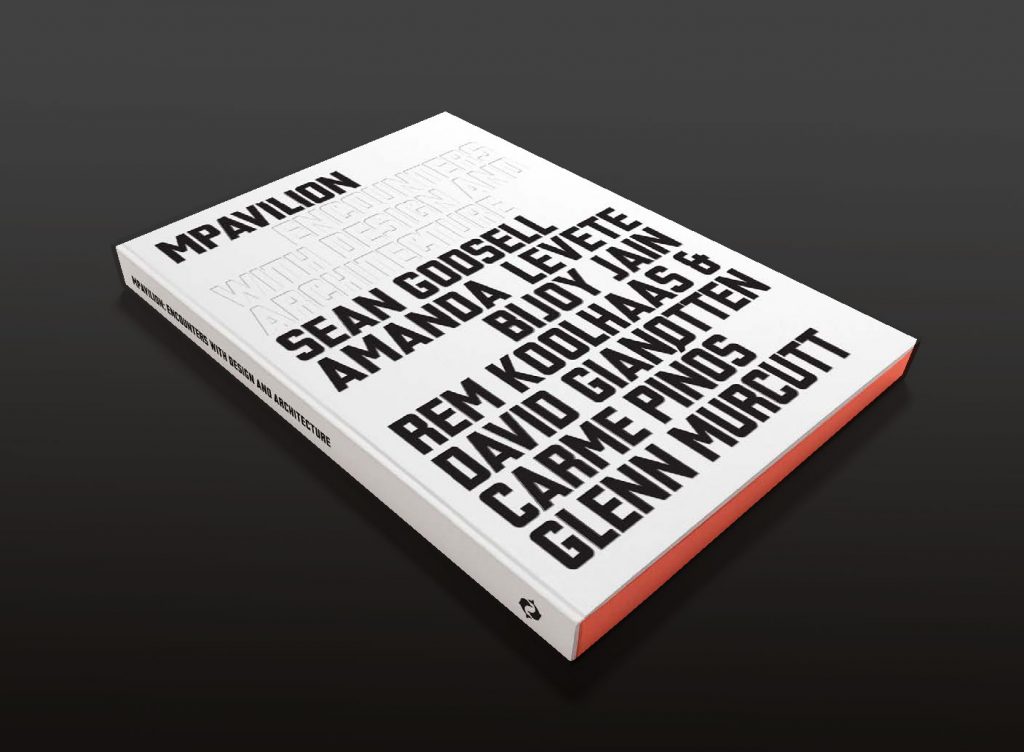 Learn more about MPavilion: Encounter with Design and Architecture