From an overwhelming response to the call-out, a combination of solo artists and musical groups have been selected to take part in the unique project. The 5 soloists/groups commissioned are: The Opals, Mara Schwerdtfeger, Shelly Senbei, Hachiku and IJALE.

MERGE unfolds in two parts: the first online in November 2020, and the second will be a live performance at MPavilion Docklands in 2021.

For part one, each artist/group will perform and record and an existing musical work in one of the following heritage locations: Villa Alba Museum, Waller House, Australian Tapestry Workshop, Trades Hall. These performances will air online on OpenHouseMelbourne.org in November 2020.

In 2021, the artists will perform a new musical work as part of MPavilion 2020’s expanded program. Each of these new works will be performed live at Amanda Levete’s MPavilion Docklands, as part of Melbourne Music Week.

The artists chosen for MERGE represent a microcosm of the eclectic musical talent that has made Melbourne a global music hub.

The Opals is a collective of women who collaborate on ambient soundscapes using both improvisation and written composition; Mara Schwerdtfeger is a sound artist and composer whose performed pieces and commissioned soundtracks for dance, film and installations explore the crossover between physical and digital environments; Shelly Senbei is a multidisciplinary collective of artists from the western suburbs of Melbourne that produces dark, dingy, bombastic, brash and in-your-face pieces paired with poetics about the members’ own personal adversities and experiences; Hachiku is the brainchild of German bedroom-producer Anika Ostendorf, who writes and produces her ethereal, home-made dream-pop from whichever room she is currently inhabiting; IJALE is a Melbourne producer, vocalist and performer who blends afrocentric sounds that reflect his Nigerian heritage with myriad other musical influences from his Australian upbringing in the internet age.

As part of Open House Melbourne, the MERGE events of November will happen in heritage venues that have been specially chosen to enhance each musical performance.

Villa Alba Museum in Kew is prized for its architectural beauty, and magnificent Victorian interiors with hand-painted decorations; Mara Schwerdtfeger will use multiple microphones to highlight the natural room tones and their autonomous creaks, while responding musically with her viola. Jack’s Magazine, a former storage facility for explosives located on the Maribyrnong river, is a remarkable remnant of Melbourne’s military and industrial past; Shelly Senbei will use this space of bygone warfare to perform a kind of ‘metal machine music’ borne of multicultural childhoods in the industrial western suburbs. 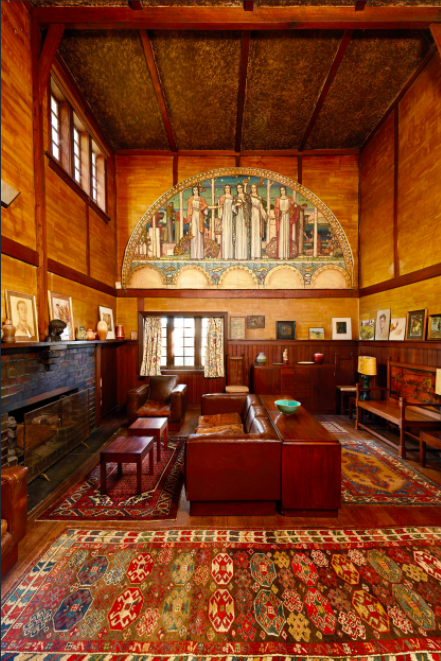 Waller House in Ivanhoe is the beautifully-maintained former dwelling and studio of Australian muralist, mosaicist and stained glass artist Napier Waller; from field recordings taken inside the site, Hachiku will create a conceptual music piece inspired by Waller’s mosaic technique. Trades Hall is the iconic home of the Victorian Trades Hall Council, which has stood as a symbol of Victoria’s groundbreaking labor history for over 150 years; representing the collaborative achievements of the trade union movement, the eight musicians in The Opals will perform a composition in honour of the eight-hour working day in the building’s open, stately interior.

Australian Tapestry Workshop is the only workshop of its kind operating in Australia, with large spaces dedicated solely to the production of hand-woven tapestries and the support of local artists, architects and designers; IJALE will stage a performance that responds to the site’s location on the unceded land of the Yluk-ut Weelam of the Wurrung Boon people and the history of colonial co-option of black and indigenous labour and creativity across Australia and the world.

The MPavilion 2020 program endeavours to stimulate audience and artistic engagement with a greater investment in artists, performers and collaborators. At a time where artists and designers have been disadvantaged, displaced and disconnected due to the pandemic, MPavilion is adapting its operation to be more accessible to more Melburnians while supporting new needs in the most efficient and sustainable ways. Driven by this mission to aid creativity in the wider community, MPavilion is set to deliver an amplified new program across its six locations from 12 November 2020 to 5 April 2021.

We’ll be announcing more details about the program for MPavilion 2020 – stay tuned for updates.